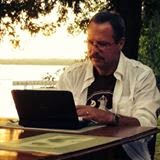 First, a bit about myself. I am proud to say that Flint, Michigan is my hometown and that I loved growing up there. I graduated from Flint Central High School in 1981. While in high school and a year or so after, I had the fascinating experience of being on the writing staff of the Flint Voice newspaper which was founded and edited by the now famous Michael Moore. Yes, a total name drop!

I attended Grand Valley State Colleges for one peace activism filled year. Unfortunately, I forgot to go to class in the 1981/82 academic year. Enough said.

After transferring to Eastern Michigan University I graduated from EMU with a English Literature degree and a minor in writing.

This brings us to the Ypsilanti, Michigan based Purple Walrus Press!

I founded Purple Walrus Press in 2012 in Ypsilanti, MI. PWP is primarily focused on Ypsilanti / Ann Arbor, MI area news, but we also address issues and news on a state and national level as well. PWP strives to shine a light and provide perspectives not always featured in the mainstream media. PWP also covers breaking news events in and around Ypsilanti and Ann Arbor. PWP features music and theater reviews! Purple Walrus Press presents online articles daily, but we also publish a quarterly print edition which you can pick up for free around Ypsilanti and Ann Arbor. Look for upcoming columns from PWP writers listed below, as well as yours truly, of course.

Other PWP Writers and contributors include the following:

Bob Resch. Was the drummer in the funk band Shotgun, and is an astute observer and writer of politics in America.

Eoin Ryan. Has contributed articles relating to the music scene.

Bill Hammond .Bill and I were colleagues at The Flint Voice Newspaper founded and edited by Michael Moore in the old days in Flint!

Brooks Parola. Life long friend and keen observer of political events. We grew up together in Flint.