Vigil & Remembrance for victims of Newtown and all victims of gun violence Thursday, December 14, in Ann Arbor. 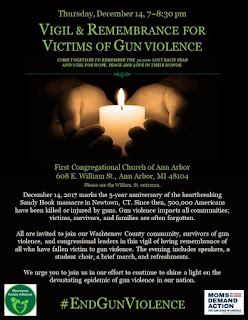 Thursday, December 14, 2017 will mark the 5th anniversary of one of the most horrific tragedies in my life time. On Dec 14, 2012, 20 children between the ages of 6 and 7 were massacred  in Newtown, Connecticut at Sandy Hook Elementary School by a lone gunman who shot his way into the school at 9:30 am that morning.

I learned of the massacre around 11:00 am, shortly after the shooting occurred Thursday morning, December 14, 2012, from a very distraught phone call from my then 82 year old father who lives  close to Newtown in the nearby town of Newington, Connecticut located a short drive away. I had never heard my Korean War veteran father sound so upset and shaken than he was that dreadful morning of the horrific shooting in the community not far his home. If ever there was a motivating reason to implement major gun control laws in our nation, the Newtown slaughter was it.

Thursday, December 14, 2017,  Michigan Moms Demand Action will co-host a vigil to honor the 26 killed in Newtown, Connecticut and all survivors of gun violence. The vigil will be held at First Congregational Church of Ann Arbor located at 608 E. William St in downtown Ann Arbor. The vigil will begin at 7 pm.

Over 200 events will be held throughout the country to honor Sandy Hook and demand action to end gun violence.

All are invited to join in this vigil and remembrance of victims of gun violence. The vigil will include guest speakers, a performance from a student choir, and a march.