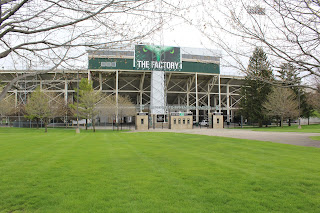 The Eagles of Eastern Michigan knocked off Coastal Carolina in the football season opener Saturday by a score of 30-23 at Brooks Stadium in Conway, South Carolina. The televised game (ESPN+) showcased Eastern's strengths, including a consistent running attack, strong passing game, grit and determination. In other words, this team has the tools and the character to win a lot of football games.

By the end of the the 1st quarter EMU found themselves down by 10 points. However, the Eagles were down, but not out, as they stormed back in the second. To begin the second quarter EMU senior quarterback Mike Glass hit Wide receiver Dylan Drummond with a nifty 11 yard touchdown pass. From then on Eastern's offense was on roll and the Eagles stingy defense kept the Chanticleers at bay for the rest of the game.

Next, Eastern Michigan will take on the Kentucky Wildcats Saturday, September 7 at Kroger Field. Kick off at 7:30 PM. The game will be televised on ESPN U and SEC Network. You can also catch the game on WEMU 89.1.
at 9:57:00 AM
Email ThisBlogThis!Share to TwitterShare to FacebookShare to Pinterest