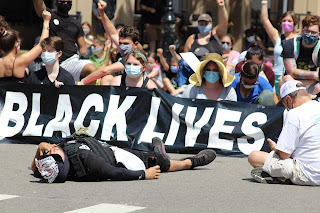 Temperatures approaching 90 degrees did not stop approximately four-hundred demonstrators from protesting federal arrests that have been occurring during Black Lives Matter protests in the nation during the last few weeks. The demonstration took place in front of the Federal Building in downtown Ann Arbor Saturday afternoon. According to organizers, the goal of  the protest and march was to nonviolently protest the arrests and detention of protesters by uninvited and unidentified Federal Officers. The protesters carried signs saying Black Lives Matter, Love One Another, No Military War On the Black Community, I Can't Breath, No Gestapo, Stop Racist Police Violence and Our Constitution Is on Life Support.

Between 1 PM and 2:30 PM several speakers addressed the demonstrators in front of the Federal Building. Speakers included Ann Arbor Mayor Christopher Taylor, Washtenaw County Sheriff Gerry Clayton and Representative Yousef Rabhi. During his address to the protesters, Representative Rabhi stated, "It is not just about voting in November, it is about showing up everyday.

After the speakers finished addressing the demonstrators, the protesters began marching through the streets of Ann Arbor, as diners looked on from outdoor cafes and restaurant seating. Customers dining on the sidewalks and streets looked on silently as protesters marched by.

As protesters marched to the intersection of Liberty and Division, the marchers stopped and took a knee in silence while blocking the intersection in commemoration of George Floyd. Floyd was killed by a Minneapolis police officer in May. 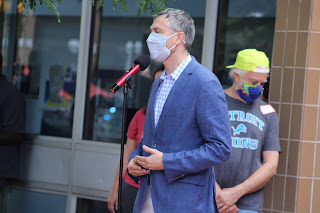 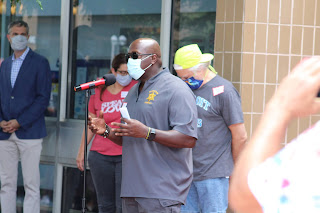 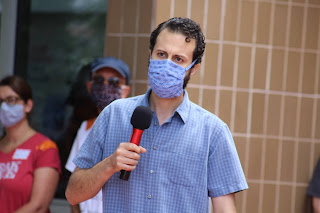 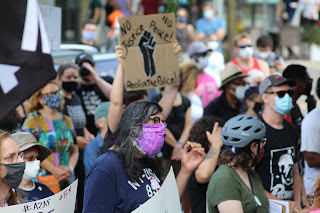 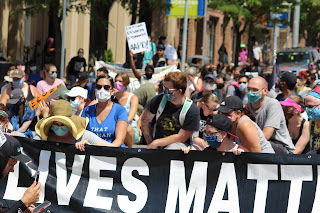 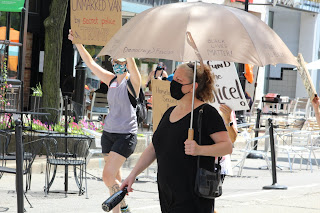 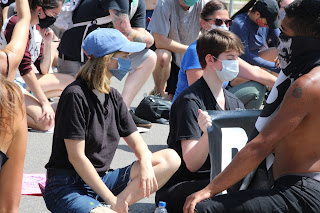 at 7:39:00 PM
Email ThisBlogThis!Share to TwitterShare to FacebookShare to Pinterest