British Rockers Mongrel Dogs Out Of East London UK Rock Like a Hurricane With New Releases. 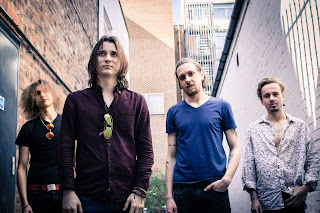 In 2017 I struck up a correspondence with British rockers Mongrel Dogs after they sent me what was then their latest single/video 'High'. I reviewed their excellent rocker 'High' in May of 2017 and have been in touch with the guys ever since. This band is based in East London in the UK, although they sound like they could have easily come straight outta Detroit Rock City. Major influences on Mongrel Dogs include Black Sabbath, Led Zeppelin, Deep Purple and Jimi Hendrix, though their sound possess the punch and firepower of Guns And Roses and legendary Detroit band The MC 5.

Last week Mongrel Dogs forwarded me their recent single/video 'Come On' and a brand new single titled 'We'll Paint This Town Red'. Once again I'm very enthusiastic about this band. Listen, all of you fellow Motor City fans of straight ahead meaty Rock and Roll, these guys are good!

at 9:10:00 PM
Email ThisBlogThis!Share to TwitterShare to FacebookShare to Pinterest