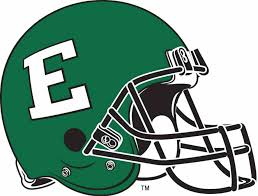 The Eagles of Eastern Michigan University knocked off the Central Michigan Chippewas on the gridiron at Ryneason Stadium (The Factory) Saturday afternoon in Ypsilanti. Under sunny skies and temperatures in the 40's you couldn't ask for a better football weather Saturday here in the upper Midwest. Best of all, however, was a much needed win for our EMU Eagles.

With a record of 5-5 the Eagles need one more win to become bowl eligible and that would be something special. November 10 EMU takes on Akron and on November 23 our EMU Eagles finish the season against Kent State.

After the injury to Glass Saturday, a very capable Tyler Wiegers came into the game for Eastern completing 17 of 25 passes for 150 yards. EMU running back Shaq Vann rushed for 117 yards on 13 carries. However, it was EMU's stellar defensive play that paved the way to victory Saturday over the Chips of CMU.

Next up Eastern Michigan takes on Akron at The Factory at home in Ypsilanti. Kick off at noon!


at 5:46:00 PM
Email ThisBlogThis!Share to TwitterShare to FacebookShare to Pinterest