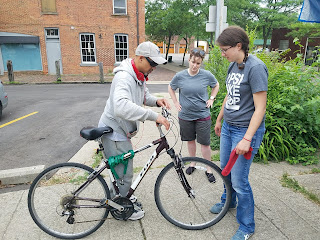 The Ypsi Bike CO-OP just concluded year two with the Ypsilanti Depot Town Farmers Market. The Ypsi Bike CO-OP offers a great service to the community by helping people in the local community fix their bikes, learn the basics about bike maintenance and providing donated bikes to folks in Ypsilanti so that they can ride a safe bike. Very cool! According to a statement from the Ypsi Bike CO-OP, "The co-op received donations of fixable bikes, with the intent to provide them to individuals that may not only use them for recreation, but need them for basic transportation. The Co-op is planning on expanding programs in the future to better serve the community, such as specific workshops on common bike repairs."

In 2018 20 CO-OP volunteers worked on over 250 bikes while racking up nearly 700 hundred volunteer hours and 16 donated bikes. Twenty-one of the bikes given back to the community, according to the CO-OP.

CO-OP volunteers have been very moved and motivated by human stories they have encountered as they have become a part of peoples lives in the community. According to a statement from Ypsi Bike CO-OP, "A resident came to us in desperate need of reliable transportation, and was not able to afford a new bike,“ said co-op volunteer Katie Carlisle.  “We assembled and tuned a solid, reliable bike from spare parts and got him riding again,” said Carlisle.

Be on the look out because Ypsi Bike CO-OP will return to the Ypsilanti Farmers Market Depot Town next year!


at 1:55:00 PM
Email ThisBlogThis!Share to TwitterShare to FacebookShare to Pinterest