Harvest Festival in Detroit east side neighborhood takes on soggy night and Statue of Liberty?

The Farnsworth neighborhood Harvest Festival held on Moran Street on Detroit's east side in the Motor City Saturday night, November 4, was at once interesting, intriguing and well worth the drive from Ypsilanti, even in the driving rain. In other words, I'm glad I braved the the weather and unexpected traffic jam on 94 E. to make it on time for the annual neighborhood festival.

The Harvest Festival was held in a vacant lot near the corner of Farnsworth and Moran, which is located off  of East Grand Boulevard in Detroit. As far as food and drink on the rainy Sunday evening, there was plenty. Several tables, under canopy, were set up in the lot in close proximity to a outdoor wood burning stove. Apparently, the wood burning stove stays put there in the vacant lot all year round. The lot definitely seems to be a neighborhood gathering area.

Lets talk food. Two tables were stacked with fresh pieces of wood-stove made and delicious mounds of pizza slices, topped with olives, artichoke, tomatoes, mushrooms, green pepper and mozzarella. This was no ordinary pizza, this stuff stuck to your ribs. Another table featured a steaming hearty lentil soup. Perfect for an outdoor harvest festival on a rainy night in the Motor City. I sound like Anthony Bourdain! Scratch that...Bourdain is much cooler than I am.

A couple hours later came the event that everyone, well, almost everyone was waiting for. Word was that once darkness descended on the Detroit east side neighborhood, a giant previously constructed, um,  structure, was to be erected and set afire in a different vacant neighborhood lot located a block or two away. To be honest, this caused me a little concern. I mean, burning a pre made structure in a vacant lot? Well, I guess I've always been a cautious person and the whole burning thing was a bit out of my comfort zone. Go ahead and call me a square, it's ok. I should say that I was told that every year folks do notify the Fire Department before the burning part of the festival. That, I like.

So suddenly, the soon to be burned wood structure/figure appeared in the lot and it looked a heck of a lot like, ummm, the Statue of Liberty? Word was from one person I spoke to that, yes, the roughly three stories tall figure was meant as a representation of the Statue of Liberty. Well, there is quite a likeness. The figure was built by local Detroit artist Joe Weertz, who resides in the neighborhood. It was so interesting and striking to look at that I hated to see it burn. It took several attempts, but soon the figure of the Statue of Liberty was ablaze. I took a few more steps back. Honestly, I wasn't sure what to make of the fact that the figure was set on fire. Was the burning a political statement of some sort? Did the fact that the burned figure structure was meant to represent the Statue of Liberty signify a political message relating to policies under the Trump administration? In essence, was the burning figure making a political statement through art? I asked a couple people who said they didn't know. I wanted to speak to the artist who built the figure in order to find out what the burning of the figure structure was supposed to represent but I was unable to track him down. What the figure and subsequent burning of the figure represented is up to ones own artistic interpretation. I was reminded of the fact that the beauty of art lies in individual interpretation. Whether art offends or not, is in the eye of the beholder. Nonetheless, the event was interesting to observe...from a safe distance!

There was another key event at the Harvest Festival...Hayrides. Yes, hayrides! Two tractor pulled wooden wagons offered hayrides, with hay and everything, to anyone who wanted to hop on. This was very popular with the kids of course! The tractor hayride wound its way through several blocks in the east side neighborhood and judging from the smiles on the faces of hayriders, much fun was had and that is a good thing. 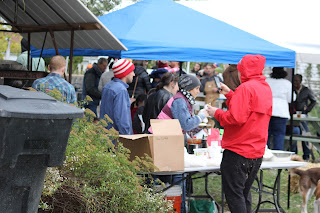 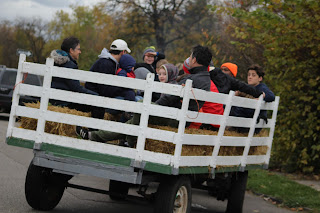 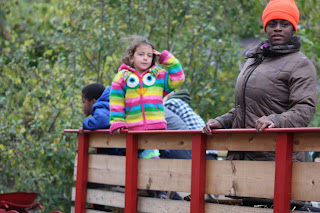 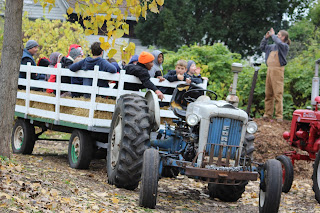 at 4:34:00 PM
Email ThisBlogThis!Share to TwitterShare to FacebookShare to Pinterest