Roughly 175 people participated in a student led Die In and rally held at Liberty Plaza in downtown Ann Arbor Saturday, March 3. Ann Arbor Pioneer high school students organized the rally / Die In to honor the victims and survivors of the Parkland Florida shooting. According to student organizers, "We will commemorate the lives of the 17 students and teachers killed and we will protest gun violence in America by staging a Die In. Together we will demand action from legislators who have stood idly by while our nations children are being massacred with weapons of war."

Participants in the Die In included not only local high school students but residents of all ages. Many participants carried signs stating 'I Should Not Be Afraid To Go To School' and 'Never Again.'

According to one student speaker who attends Pioneer High School in Ann Arbor, "We are not old enough to vote but we won't be silenced." Skyline High School senior Liam Keaton addressed the large crowd stating, "Congress misrepresented the wishes of the people after Sandy Hook...Why? The answer is the NRA."

Members of the Pioneer High School choir performed as the event came to a close. 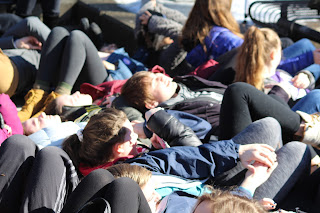 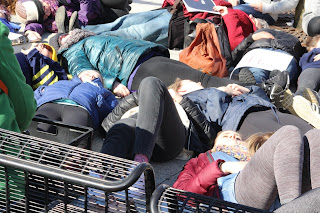 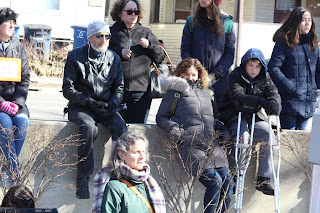 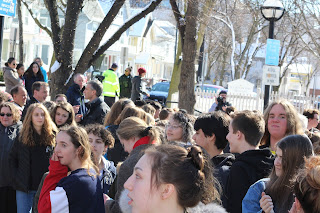 at 5:32:00 PM
Email ThisBlogThis!Share to TwitterShare to FacebookShare to Pinterest