Lights For Liberty-Ypsilanti Vigil To End Detention Camps and Violent Policies Impacting Undocumented Immigrants To Be Held At Riverside Park in Ypsilanti July 12. 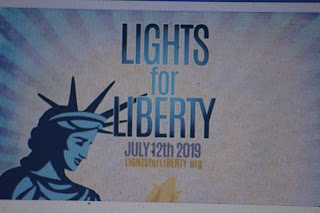 Amid reports of U.S. Immigration and Customs Enforcement (ICE) raids that will reportedly occur Sunday, July 14 in major cities across the United States, a Lights For Liberty Vigil will be held at Riverside Park in Ypsilanti Friday, July 12 at 8 PM. The vigil is hosted by the Interfaith Council For Peace & Justice and Love Resilience Action Ypsilanti.

According to a statement, the Interfaith Council For Peace and Justice is coming together with other organizations to hold a vigil to end the detention camps and all of the violent policies that are impacting undocumented immigrants as well as those seeking asylum. Vigil organizers want to come together and grieve the loss of life and trauma endured, according to a statement from vigil organizers. According to a statement from organizers, "We want to find solace in being with others who will not tolerate these atrocities happening at the southern border and across this country at the hands of ICE. And, we want to share resources and opportunities to act locally by connecting with ongoing efforts to support our own community."

Purple Walrus Press contacted ICE spokesman Khaalid Walls Thursday morning regarding whether ICE raids would be occurring in Michigan this up-coming weekend. As of Thursday afternoon, PWP has yet to receive a response.

There will also be a vigil in Ann Arbor July 12 at the Federal building on Liberty Street. The vigil will begin at 8 PM.
at 1:02:00 PM
Email ThisBlogThis!Share to TwitterShare to FacebookShare to Pinterest