If you were looking for inspiration Sunday afternoon, July 29,  you had to look no further than Brown Chapel AME Church on Michigan Ave in Ypsilanti because that was the site of one heck of a rally by Candidate for Governor Abdul El-Sayed and his his staunch supporter and fellow progressive Democrat Alexandria Ocasio Cortez.

The rally with El-Sayed and Cortez attracted a standing room only crowd of roughly 500 to 600 people in the church as crowds of more supporters were unable to get inside and stood in the over crowded church parking lot.

Inside the packed and steaming church rally participants clung to every word delivered from El-Sayed and Cortez as several times their speeches were drowned out by loud cheers and applause from the hundreds of like-minded progressive Democrats that filled the church pews and aisles.

Memorable quotes from El-Sayed Sunday included, "Our democracy is sick."  "We have a president who thinks tax cuts will make all of us rich, too."  "Who are we and who do we want to be?" "Are we ok with the Flint water crisis which continues to rage!?"

Each quote was met with shouts of approval and cheers from the scores of supporters.

The loudest and most enthusiastic cheer was for Democratic Socialists of America party member Alexandria Ocasio-Cortez who recently won the Democratic primary in New York's 14th District by defeating incumbent caucus chair Joe Crowley. It was obvious that everyone in the roomed adored Cortez, as was apparent by the cheering and appreciative applause she received from the supporters in crowded church.

Quotes from Cortez that stood out were as follows. "We can't get single payer in the Bronx until we get it in Michigan." "We must realize that the Bronx , Detroit, St Louis, and Cleveland are more alike than people think. " There is no zip code for injustice, No zip code for standing up for what is right." "We need to give people hope in a system they feel has forgotten them." It is that last statement that resonated most with folks in the packed church in Ypsilanti Sunday. "Our job is to invite people to vote and give them reason to believe."

It is safe to say that we are witnessing the birth of a strong progressive political Democratic movement in this country. All who attended this event left refreshed, inspired and invigorated. 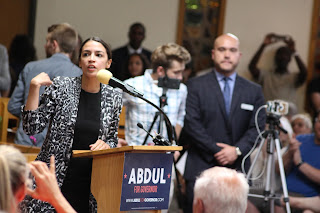 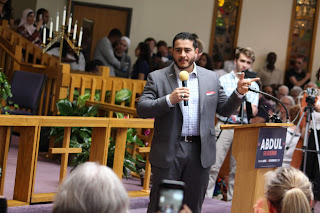 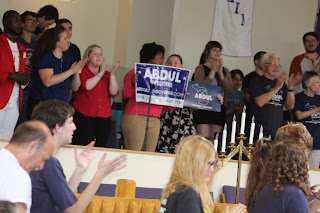 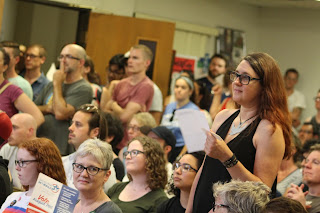 at 6:40:00 PM
Email ThisBlogThis!Share to TwitterShare to FacebookShare to Pinterest