Power restored to Normal Park Neighborhood in Ypsilanti Friday evening after yet another outage.

At approximately 3:30 pm Friday afternoon it was lights out for much of the Normal Park Neighborhood in Ypsilanti. It remained lights out until 8:30 pm Friday evening. Around 3:45 this afternoon the Ypsilanti Fire Dept responded to the field adjacent to the playground at Estabrook Elementary School off of Cross Street in Ypsi.

At the scene I spoke to a fireman with the the Ypsi Fire Dept. The fireman told me that a wire had come loose and was dangling against a tree in the field behind Estabrook. The sparking wire ignited the tree causing a small fire. The fire was immediately extinguish by the Fire Dept and no one was hurt. The fireman said it was probable that the sparking wire and ensuing small fire caused the power outage in Ypsilanti, though he indicated that he was not positive.

Within an hour DTE arrived to the scene and by 8:30 pm Friday power was restored to the area.

Neighbors who live in the area expressed some frustration with the fact that there have been several power outages in the area over the past few months. 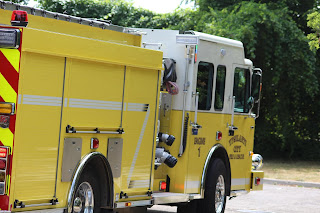 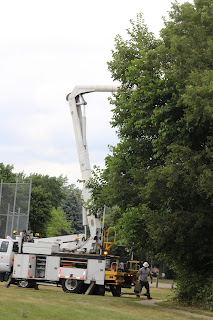 at 9:31:00 PM
Email ThisBlogThis!Share to TwitterShare to FacebookShare to Pinterest