Wonderful New Children's Book by George Yuhasz: Imagine That: The Magic of the Mysterious Lights. 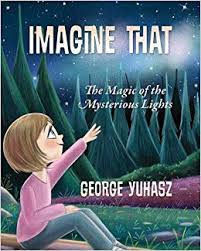 If you are a fan of children's literature and haven't heard of George Yuhasz, you'll hear of him soon, especially if you have kids. Imagine That: The Magic of the Mysterious Lights, written by Yuhasz, who resides in the Blue Ridge Mountains of North Carolina, was released in April 2019 and guaranteed, if you pick it up for the kids in your life they are going to love it, heck, you'll love it, also.

The story revolves around a little girl named Evelyn who lives with her mom, dad, and a brother in a house with a large backyard. At night, before going to bed Evelyn likes to go outside in the backyard to look at the Milky Way and the Big Dipper and think and dream about other planets that are out there in the universe.

But, here's the thing. She has a secret. Evelyn has the ability to see flashes of light that streak across the sky at night that nobody else can see. Soon she will learn that this secret is a beautiful gift.

According to George, "I was inspired to write this children’s book by my granddaughter. Her fascination with the night sky and its celestial bodies was both infectious and provocative. This story was written not only as a labor of love, but also in response to the opportunity to celebrate the sense of wonder and awareness of young children."

Find the book at Amazon and Barnes And Noble.


at 7:56:00 PM
Email ThisBlogThis!Share to TwitterShare to FacebookShare to Pinterest