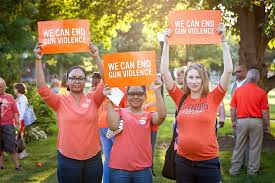 There is a wonderful and important organization called Moms Demand Action and they are hosting a wear orange event on Sunday, June 9, at Riverside Park in Ypsilanti as a part of the Wear Orange Weekend which follows National Gun Violence Awareness Day on June 7. The organization demands action for gun sense in America.

The Michigan chapter of Moms Demand Action is organizing a rally honoring the lives of those affected  by gun violence and elevating gun violence prevention efforts in not only Michigan, but the entire nation.

Those speaking at the rally will include gun violence survivor Gwendolyn La Croix, whose son killed himself with a unsecured gun in 2016. Also speaking will be Ypsi City Councilman Anthony Morgan, Rep. Ronnie Peterson of the Michigan House of Representatives, District 54, Sheriff Jerry Clayton, and several others.

The event will be held at Riverside Park in Ypsilanti located at 515 E. Cross Street on Sunday, June 9, 2019, at 2 pm.
at 9:45:00 PM
Email ThisBlogThis!Share to TwitterShare to FacebookShare to Pinterest