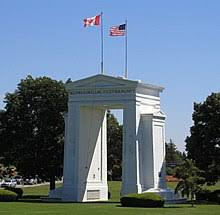 According to CAIR-Washington, the Washington state chapter of the Council on American-Islamic Relations is currently assisting at least 60 Iranians and Iranian-Americans  who were detained for long periods of time and questioned at length at the Peace Arch Border crossing located in Blaine, Wash. The Peace Arch border connects the cities of Blaine, Washington and Surrey, British Columbia on the Canadian-United States border.

According to CAIR, there are reports that many more were refused entry to the United States because of lack of capacity for Customs and Border Patrol to detain them. It is reported that as of 2:00 pm Sunday, other Iranian Americans were about to cross the Peace Arch Border while returning back to their homes in the United States after attending an Iranian pop music concert that took place Saturday in Vancouver, Canada.

According to the Council on American-Islamic Relations, those who were detained stated that their passports were confiscated and that they were questioned about their political views and allegiances.

According to CAIR, a 24 year old American citizen and medical student and her family were allegedly detained and interrogated for over 10 hours at the Peace Archer Border Crossing prior to being released early Sunday morning. CAIR stated that according to Crystal, "The vast majority of people being detained last night were American citizens."
at 5:33:00 PM
Email ThisBlogThis!Share to TwitterShare to FacebookShare to Pinterest