For People Upset About Calls To "Defund the Police." By Purple Walrus Press Contributor and Flint Activist Melissa Mays. 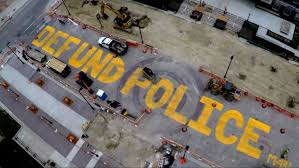 For people who are upset about calls to "Defund the police," please read this article before getting upset. It seems certain media outlets <cough>FOX<cough> and others are muddying the waters as per usual.

Note: The following paragraph in quotes is from an article published in Thecut.com
"What does it mean to defund the police?

Defunding the police does not necessarily mean getting rid of the police altogether. Rather, it would mean reducing police budgets and reallocating those funds to crucial and oft-neglected areas like education, public health, housing, and youth services. (Some activists want to abolish the police altogether; defunding is a separate but connected cause.) It’s predicated on the belief that investing in communities would act as a better deterrent to crime by directly addressing societal problems like poverty, mental illness, and homelessness — issues that advocates say police are poorly equipped to handle, and yet are often tasked with. According to some estimates, law enforcement spends 21 percent of its time responding to and transporting people with mental illnesses. Police are also frequently dispatched to deal with people experiencing homelessness, causing them to be incarcerated at a disproportionate rate."


A good example is that in Flint, we have people without running water, without safe water, without FOOD or medical care or a place to live. But for SOME DAMN REASON, we have a $658,000 anti-mine tank. I'm FAIRLY certain that poison water, starving, homelessness, lack of quality healthcare and running water IN A PANDEMIC is more of a threat to Flint residents than MINES. Defunding the police is simply talking about putting OUR money where it will help us the most and I'm sorry, tanks are not it.


Contributed to Purple Walrus Press by Melissa Mays of Flint.

at 12:32:00 PM
Email ThisBlogThis!Share to TwitterShare to FacebookShare to Pinterest