The political organization Ann Arbor Indivisible hosted a Community Town Hall w / Congresswoman Debbie Dingell Tuesday night at Ypsilanti High School. First, let me say that Debbie Dingell (D-MI) is one hard working Congresswoman. Dingell stated that she has taken part in ten town hall meetings in ten days! That's a helluva lot of town halls. I would say that well over one-hundred residents attended the dynamic town hall, and I'm sure that not one of them left unsatisfied.

Tuesday's town hall focused on healthcare, the environment, and protecting good jobs for families. Those attending the town hall were encouraged to ask questions pertaining to what they were passionate about, whether it was about the environment, the Supreme Court, or immigration. Dingell made it clear that she wanted to know what people were concerned about.

As the town hall began Dingell made it clear that she believes in telling the truth, even if it means praising positive political initiatives taken by republicans, and that was refreshing to me. For example, During her opening speech Dingell said that there are many elected officials in Michigan, Democrats and Republicans, who are deeply concerned about the Great Lakes in Michigan and want to see available funding for Great Lakes restoration.

Other issues that Dingell commented on during here opening remarks included the Flint Water Crisis, lack of pay raises in the state, and the Affordable Care Act. Dingell commented that the Flint Water Crisis is terrifying, and that, and I'm paraphrasing, the infrastructure must be fixed. Dingell added that fixing the infrastructure in Flint needs to include replacing corroded water pipes.

Around 18 people stood in line to ask questions during the Q & A section of the town hall. One woman asked Rep. Dingell about her stance on abortion. Dingell responded, "Abortion is between a woman and her doctor period." Next, a young man in the audience asked about her feelings on deploying U.S. troops in Syria. Dingell responded,"Trump needs congressional approval before authorizing the deployment of troops in Syria." Her response was met with great approval in the form of robust applause from the audience.

Near the end of the town hall Dingell made two comments that struck me, First,"We need to get money out of politics." How true. The second comment Debbie made that stayed with me was her statement,"If you want to fix the problem, you have to be part of the answer. How true, Debbie, how true. 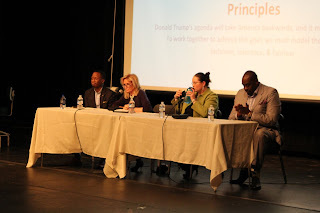 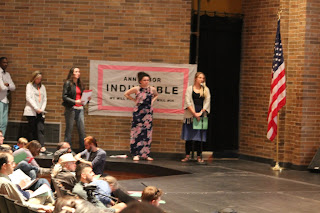 at 10:41:00 PM
Email ThisBlogThis!Share to TwitterShare to FacebookShare to Pinterest