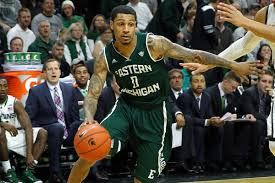 The Eastern Michigan Men's basketball team will take on no.15 Michigan State on Saturday, December 21, in East Lansing at the Breslin Center at 7 PM. On December 17 EMU defeated a strong Northeastern Huskies team 60-55 at the Convocation Center in Ypsilanti in front of a raucous and enthusiastic home crowd. Eastern Michigan fans have every reason to be joyously enthusiastic as the EMU Eagles are off to a scorching 9-1 start having not lost a game at home this season. EMU has held opponents 57.1 points per game which ranks 10th in the nation.

Watch Eastern Michigan take on Michigan State on the Big Ten Network Saturday, December 21 at 7 PM.. You can also listen to the game on WEMU 89.1 on your dial.
at 9:34:00 PM
Email ThisBlogThis!Share to TwitterShare to FacebookShare to Pinterest