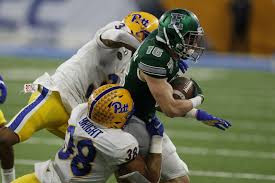 Eastern Michigan was defeated in the Quick Lane Bowl 34-30 in front of 34,000 fans by the University of Pittsburgh in what can only be described as an ugly and inexcusable display of unsportsmanlike like conduct by EMU senior quarterback Mike Glass in the final moments of a close game. For a team that played as well and as hard as EMU did in Thursday's bowl game at Ford Field in Detroit, the behavior of Glass only made the loss that much more painful for EMU students, fans and alumni. With moments left in the game and EMU with the ball trailing by four points Eastern quarterback Mike Glass was sacked for a short loss. But instead of popping up and and returning to the huddle, Glass jumped to his feet and threw punches at  two Pitt players, yes, two. Glass was immediately ejected from the game. This was a game that Eastern still had a chance to win. What a shame to end in such a ugly display of out misconduct.

6-7 EMU entered the game as 13 point underdogs, but played a stellar game on both sides of the ball. EMU senior quarterback Mike Glass completed 28 of 50 passes for 311 yards and two touchdown passes. EMU led Pitt until there was only 47 seconds left in the fourth quarter. It was midway through  the 4th that Panther quarterback Picket began dissecting the Eagle secondary with precision pass completions that led to a game tying touchdown pass in the fourth quarter. Picket finished the game throwing for 361 yards and three touchdowns paving the way for a Pitt victory. Pittsburgh's Maurice Ffrench snagged 12 passes for 165 yards.

Thursday's game was Eastern's third bowl game appearance in four years and is proof of how EMU coach Chris Creighton has turned around the once ailing EMU football program. But to close the final minute of a tight game with the ejection of EMU quarterback Mike Glass has left fans with a sour taste and that's a shame.


at 9:57:00 AM
Email ThisBlogThis!Share to TwitterShare to FacebookShare to Pinterest