Purple Walrus Press reported Wednesday, that according to an MDOT worker, "Parts that fix it need to be custom made." The worker stated Wednesday that there would be big hole in street Thursday. Sure enough, as of 12:30 pm Thursday, there is a gaping hole in the street directly in front of the Big Brothers Big Sisters office. Workers on the scene Thursday told PWP that they were hoping to have the repair finished by Saturday barring any complications. However, according to a public notice released from the City of Ypsilanti Wednesday night, the closure of eastbound Michigan Ave is expected to last through Monday, May 15.

Thursday afternoon water could be seen gushing from what can be best described as large above ground hoses that are diverting water around and away from the enormous 20 ft long, 15 ft wide and 12 ft deep hole in the ground in the middle of eastbound Michigan Ave,

According to an individual with Big Brother Big Sisters office located directly next to the section where the repair work is occurring, the situation has not had any effect on the organizations downtown office. 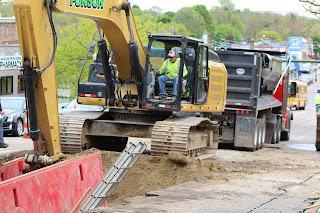 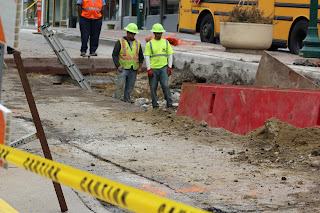 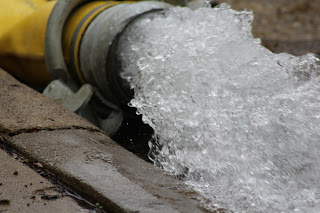 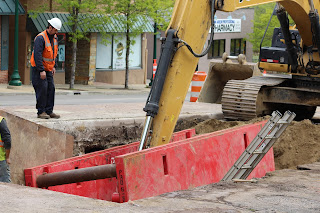 at 1:30:00 PM
Email ThisBlogThis!Share to TwitterShare to FacebookShare to Pinterest