The Ann Arbor Civic Theatre Junior Theatre production of Disney's The Jungle Book Kids played to a packed house at the University of Michigan Arthur Miller Theatre Friday evening in Ann Arbor and everyone attending left with a smile on their face. If you love singing and dancing kids, monkeys, elephants, tigers, bears, snakes, vulchers, and bees then you will surely love this production of the Jungle Book!

Directed by Caitlin Rowe the plot revolves around the main character of Mowgli "the man cub" played by a very talented young man named Emmanuel Morgan who obviously enjoyed his role in the play, and a big, bad and love-able bear who lends Mowgli a helping paw as Mowgli navigates the vast jungle alone. In the end Mowgli restores peace among the many animals he encounters in the jungle world he feels so connected to. He also learns a little bit about being human along the way.

The sneaky, slithery snake Kaa played by a silky smooth voiced Mia Colony and her accompanying Coils were fantastic as they harmonized, danced and hissed with eloquence. Shere Khan also put in a fabulous performance singing with hip, savvy.

Ann Arbor Civic Theatre Junior Theatre Disney's The Jungle Book performances will continue this weekend May 14 and 15 at 1:00 pm and 3:30 pm. Check it out. You'll go bananas over it! 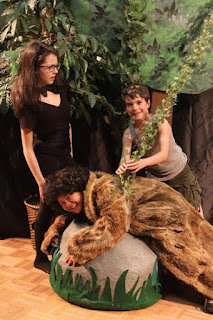 at 10:43:00 PM
Email ThisBlogThis!Share to TwitterShare to FacebookShare to Pinterest