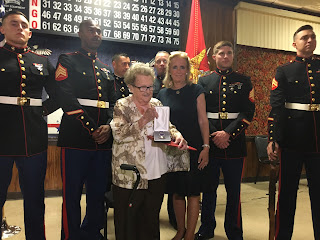 According to a press release Saturday from Debbie Dingell's office, "It's an honor to present the family of Rupert Scheer with this deserving recognition of his service and sacrifice." "It is because of individuals like Corporal Scheer, who serve this country with courage, valor and distinction, that we remain the land of the free and home of the brave."

According to Debbie Dingell's press release, on June 30, 1918 Corporal Scheer was badly wounded while serving in France in the aftermath of the Battle of Belleau Wood.

at 10:11:00 PM
Email ThisBlogThis!Share to TwitterShare to FacebookShare to Pinterest