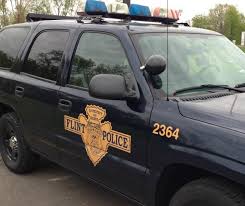 This past Wednesday morning, July 12, I learned from a friend who lives in Flint that a horrible home invasion & murder had taken place the previous day in the neighborhood I grew up in on Flint's Eastside. Further, the first home that my wife and I bought, and one that we lived in for five years prior to moving to Ypsilanti in 2004, is located two blocks away from the location of the home invasion/murder.

This morning more details emerged about the tragic event that occurred this past Tuesday. Today I learned from  WJRT  ABC 12 News Flint, that five individuals have been charged in connection to the home invasion and murder on Flint's Eastside Tuesday, July 12. The five individuals have been charged in the death of a Flint man who was shot to death during the home invasion. The home invasion/murder occurred in the 100 block of S.Cumberland Street that intersects Commomwealth St located on the Eastside.

According to WJRT News, a neighbor heard shots, looked out the window and saw an upstairs light on. According to reports this would have been at approximately 4:56 AM Tuesday morning. It was clear from the witnesses statement to WJRT that the police responded almost immediately. WJRT reports that police think that after the invaders entered the home, the homeowner went for a gun which was followed by an exchange of gun fire inside the house. The victims wife was upstairs and was not injured. Flint Police stated to WJRT that one of the home invaders left the scene in a car before crashing into another vehicle at the corner of Court Street and Vernon a few blocks away.

In my mind, the fact that five, yes five individuals participated in the home invasion is particularly chilling and alarming. This crime was an all out coordinated assault on innocent unsuspecting home owners in the hours before day break. The young ages of those charged is no less disturbing.

I know this neighborhood well, as I grew up there and, as stated above, purchased a home in this neighborhood before moving to Ypsilanti. This is a good neighborhood, full of good people, many of whom are as dedicated to the city of Flint as my friends and family are or have been in the past. Flint was very good to me and I have many wonderful memories of growing up in this area. Unfortunately, this scenario plays out far too often, not only in Flint, but across the entire nation. So sad and disturbing.


at 7:37:00 PM
Email ThisBlogThis!Share to TwitterShare to FacebookShare to Pinterest