Approximately 500 people took part in a vigil and rally in downtown Ann Arbor Tuesday evening July 18, protesting the deportation of Ann Arbor resident Lourdes Salazar. The event began with a vigil at St Mary's Church located on E.William Street in Ann Arbor and was followed by a march to the Federal building a few blocks away on E. Liberty Street.

The purpose of the vigil & rally was to stand in solidarity with Lourdes the night before she is supposed to report to ICE (Immigration and Customs Enforcement) with a plane ticket to Mexico. This according to a statement from the organizers of the vigil/rally.

According to event organizers, Lourdes has lived in the city of Ann Arbor for over 20 years and has three children who are U.S. citizens. Lourdes Salazar faces being deported in August.

According to an event post by organizers, "Lourdes first came into contact with ICE in 2011, and after being detained for almost a month, ICE "traded" Lourdes for her husband. Lourdes' husband was deported and Lourdes was allowed to stay in the United States in order to care for for her children. " Purple Walrus Press has not confirmed this statement with ICE.

According to rally organizers, "Lourdes could lose her home, her community and her children could be separated from each other if she is deported." 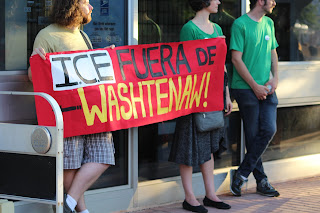 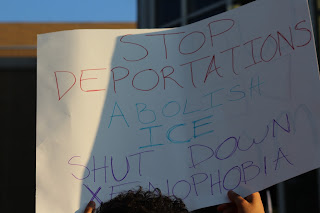 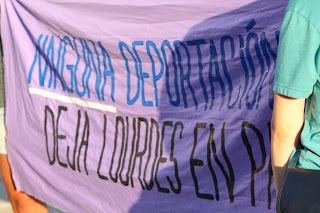 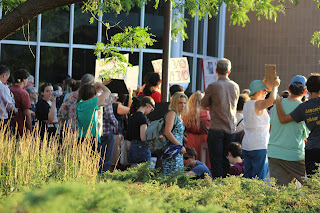 at 10:35:00 PM
Email ThisBlogThis!Share to TwitterShare to FacebookShare to Pinterest