Okay, let me get this straight. On December, 28, 2015 a Flint city hall employee returning from holiday break discovered that a window at city hall was broken. Upon entering the building the employee discovered that an office was broken into. Reports stated that inside the office documents containing the city's water information were scattered on the floor, and also that a T.V was missing. Indeed, M Live reported that officials said that an office inside city hall was broken into and that it contained documents that related to the city's water system. Wow! Further, M Live reported that the Flint Police stated that a break-in occurred at a vacant suite (sounds kind of swanky) that contained documents relating to the city's water system.

In a March 18 M Live article new Flint Police Chief Tim Johnson stated, " It was definitely an inside job. The power cord to the T.V  wasn't even taken. The average drug user knows that you need the power cord to be able to pawn it." Inside Job? Hmm.

Lets see. This burglary occurred at the same time that the Flint Water Crisis was beginning to receive big time national and world wide headlines. At this same time suddenly a Flint city hall office containing information and documents about the city's water system is burglarized. Doesn't this all sound more than a little SUSPICIOUS! Kind of brings to mind another burglary that occurred 44 years ago in this country. Now, who or whom would have it in their best interests to steal water documents from Flint city hall? Lets see. Let me think. Oh! how about this for speculation! Could it be that someone in the governors office decided that there was or could be evidence in the Flint city water records that may implicate the Snyder administration in criminal negligence in regard to the water crisis? Could it be that some aide to the governor decided to hire some schmuck to break into the city hall office or "vacant suite" with intent to find and destroy evidence that might incriminate the Snyder administration? Or how about this? Maybe the Michigan Dept of Environmental Quality was frightened about evidence that might incriminate THEM  in wrong doing or criminal negligence in relation to the Water crisis: Hell, what if the EPA hired someone to break into the office for the same reason. Who the heck knows . But the truth is that it is oddly coincidental that just as the entire nation if not the whole world was learning about the Flint Water Crisis atrocity an office at Flint City Hall containing city water files and documents was broken into. Yes, it does sound familiar.

Wild speculation? I don't think so. Where is Deep Throat when you need him?! This break-in should be viewed as one hell of a national scandal. 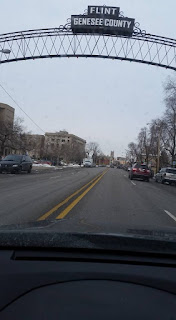 at 7:37:00 AM
Email ThisBlogThis!Share to TwitterShare to FacebookShare to Pinterest