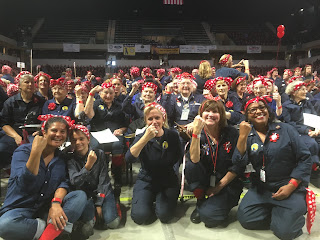 U.S. Congresswoman Debbie Dingell and thousands of other women and girls reclaimed the Guinness World Record for the largest assemblage of Rosie the Riveters since the end of the 2nd World War. The event was held at the Eastern Michigan University Convocation Center in Ypsilanti on Saturday October 14. Approximately 3,755 girls and women reclaimed the record that had previously been held by California.

According to Dingell, “Today a diverse group of women, from six weeks to 110 years old, traveled from Michigan and all over the world to help preserve our state's history and bring the Rosie record home,” said Dingell. “This was an incredible afternoon with all generations – including 58 Original Rosies – sharing stories, passing on our history and celebrating the iconic women who stepped up during World War II and forever transformed the role of women in the workplace. We were united as Americans and celebrating how everyone came together in this country at that historical time. These trailblazing women continue to inspire and empower us all, and reclaiming the world record is a perfect tribute to their enduring legacy and ‘We Can Do It’ spirit. Today we are all prouder than ever of the amazing story we represent.”

at 9:13:00 AM
Email ThisBlogThis!Share to TwitterShare to FacebookShare to Pinterest