Where does the sidewalk end? How about the corner of Stone School Rd and Morgan in Pittsfield Twp?

Something is amiss at the corner of Stone School Road and Morgan in Pittsfield Township. Hmm.. What is it? Oh, I know! There's a walkway/bridge like structure on the shoulder of the road that leads to...um, nowhere! Yes, that's right, nowhere!

Here's the story. A couple of weeks ago a reader contacted me with information about an odd structure at the intersection of Morgan and Stone School Rd in Ann Arbor. According to the message, "A year or so ago, this really elaborate pedestrian bridge was built there that connects to absolutely nothing." I know! Pretty weird. Well, understandably, this information piqued my curiosity, so on Thursday morning, October 12, I grabbed my camera, got in my car and drove over to the scene of the strange sounding structure. I headed West on Ellsworth, turned left on Stone School Rd. Quickly, Stone School becomes a dirt road. I didn't know this. Anyway, I continued down Stone School Rd another half mile and approached Morgan Rd. Sure enough, there on the left side of the road, near the little intersection, was an indeed, elaborate and nice looking structure. I'm not sure if I would call it a pedestrian bridge or a walkway. Both names would accurately describe it.

Sure enough, the pedestrian bridge/walkway did connect to...absolutely nothing! I parked my car in front of where the structure, ahhh, ended, and got out for a closer look. What I was looking at was a fairly large, well-constructed, beautifully designed walkway, with really nice side rails and everything. It does extend length wise over a sort of gully on the shoulder of the road, I believe. But it is just standing there, surrounded by a dirt road and tree's, connecting to nothing at all. The walkway simply begins and ends while connecting to zilch, zip, nada. I have to say that when I walked over to the thing, there was something slightly creepy and odd about it.

While snapping off a few photos of the walkway, a couple people driving by stopped and asked me what was going on. One fellow told me that the structure has been sitting there like that for two years. Hmm. Interesting.

The questions are, what is this structure, why is it there, how long has it been there, what is it suppose to connect to and, are public funds being used to pay for it? I left and began to try to find out some answers.

First, I contacted MDOT. According to the person I spoke to at MDOT, the walkway was not under their jurisdiction. I was told to try the Washtenaw County Road Commission. The representative I spoke with there told me that based on the location, she didn't think the walkway was under their jurisdiction either but she wasn't positive. She said she would find out. Ten minutes later I was surprised to receive a call back from the representative. I was told that the walkway was not their project and that I should call Pittsfield Twp. I did learn that the walkway is in Pittsfield Twp. I called Pittsfield Twp, spoke to two people who couldn't help me, but was connected to someone named Ben Carlisle, who it seemed would be able to provide some answers. I left a message for Carlisle, but alas, never heard from him. I wrote an email to the Twp with questions pertaining to the strange incomplete structure, but, you guessed it, no response as of October 26.

Here is what I do know. Out there at the corner of Morgan and Stone School, there is a weird and elaborate but incomplete pedestrian structure that starts and stops and goes nowhere. It looks expensive, but has apparently been sitting there incomplete for a couple years possibly. There are work signs, but it is obvious that no work has been done for quite a long time.

Could the structure be some kind of elaborate existencial statement on mankind created by a UM grad student? Is the structure part of a set for the filming of an H.P. Lovecraft or Stephen King film? I don't know, but its kinda creepy! 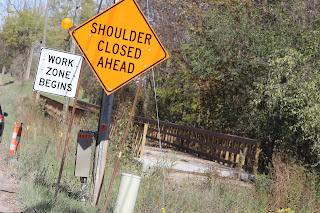 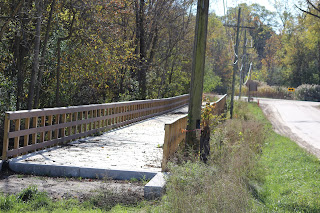 at 4:05:00 PM
Email ThisBlogThis!Share to TwitterShare to FacebookShare to Pinterest