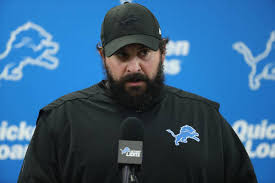 Bob Resch: Purple Walrus Press.
May 10, 2018 was a very strange day for the Detroit Lions, Lions fans,
the NFL and sports fans in general.  Newly hired head coach Matt
Patricia stood at the podium, dressed in black, and issued a statement
declaring his innocence and frustration stemming from a sexual assault
charge that happened on spring break while he was a student at
Rensselaer Polytechnic Institute on South Padre Island, Texas, in
1996.
The Lions top brass, including owner Martha Ford look like they were
attending a funeral.  This revelation must have been devastating to
hear,  BUT, none the less, they were there to support their newly
ordained coach.
Patricia was indicted in 1996, which means there was sufficient
evidence, according to the Prosecutor, to bring one count of
aggravated sexual assault to a court of law.   The case was dropped
with the woman decided not to go through with the trial.  Was it
because she would too embarrassed or did the incident really not
occur??  Only she and Matt Patricia know for sure.
Obviously, Matt Patricia never mentioned the incident when
interviewing for jobs after college.   He considered himself innocent
even though this ugly incident appears to have occurred.  Somehow, 22
years later, The Detroit News found out through a background check and
here we are today.
We are left to wonder if Lion's GM Bob Quinn didn't see, or didn't
want to see, the report on file with APG Security, a private
investigative firm in New Jersey with 21 offices throughout the United
States including Texas.
We can only hope the NFL review board will find that the charge was
unsubstantiated.
There are two sides to every story, but as long as the woman in
question chooses to maintain her silence, we are left with only Matt
Patricia's side of the story.

We can only hope that for Matt Patricia and his family, let alone Lion Nation, can get past this and move on with their hopes and dreams.
at 9:02:00 PM
Email ThisBlogThis!Share to TwitterShare to FacebookShare to Pinterest