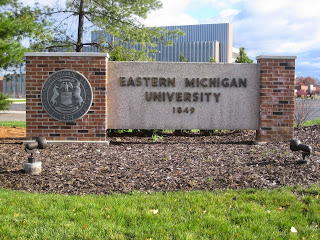 According to Eastern Michigan University, the school is in the process of installing banners that feature 108 international students attending the university, representing over 40 nations. According to EMU, the banners will surround the campus and extend into Ypsilanti.

The light post banner campaign is associated with EMU's support for the national YouAreWelcomeHere campaign. The campaign was formed in response to concern and apprehension by some international students in regard to studying in the United States. In effort to alleviate apprehension, colleges and universities have joined together to help make international students feel more comfortable and feel welcome through this campaign. This according to an EMU press release.

According to the August 2, 2017 press release from the university, "This has been a very positive campaign for Eastern Michigan University, and for universities around the country", said Walter Kraft, Eastern's Vice President for communication."
at 4:31:00 PM
Email ThisBlogThis!Share to TwitterShare to FacebookShare to Pinterest