Overflowing garbage behind properties in back parking area on Washtenaw Ave in Ypsilanti Monday. 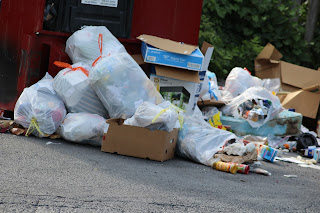 As of Monday morning, August 14, 2017, garbage can be seen flowing out of a dumpster and thickly covering the surrounding pavement in a back parking area situated behind two properties on Washtenaw Ave in Ypsilanti. The dumpster is situated in the parking area at the rear between a house located at 905 Washtenaw Ave and an adjacent apartment building just to the West. 905 Washtenaw appears to be either a sorority or fraternity, though PWP has not confirmed this. The properties are located directly across the street from the campus of Eastern Michigan University.

As of approximately 9:45 am Monday, it appeared that the garbage had been overflowing for some time. Numerous birds were visible feeding on the garbage on the pavement.
at 11:57:00 AM
Email ThisBlogThis!Share to TwitterShare to FacebookShare to Pinterest